Citibank employee, Celeste Merritt, joined Friendship House for 4 weeks in March as a volunteer through her company’s #givingback program. After signing out of her day job, she was able to dedicate 40 hours a week to us while still receiving her paycheck. She split her time between the Hope Center and Clothing Bank. Celeste shares her story below on how her path led her to volunteer with us. She remarks on her hardship, triumphs and desire to give back. Celeste has been a remarkable asset to the FH family and we thank her for her dedication to our mission.

The Path I Have Chosen
By Celeste Merritt

You can choose your own path. The world around you may be different than what you want it to be. You can make the 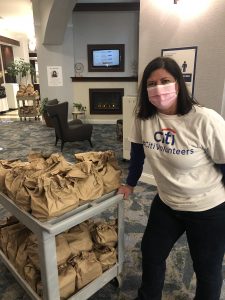 I grew up poor, “on the wrong side of the tracks” in rural Louisiana. I am a product of the system. We relied on food stamps and moved many times because my parents couldn’t pay the rent. I went to eleven different schools before I graduated high school, three in my fifth-grade year! I was never physically abused, but I saw abuse around me and was sympathetic to the victims. My mother said I’ve always rooted for the underdog.
When I was fifteen, I told my mother that I wanted to go to college to have a better life, but she didn’t have the money to send me. Neither she nor my father ever went to college, but I could see that education would get me out of the life we were living.

Fortunately for me, I was intelligent and made good grades. I was on honor roll and was in the National Honor Society. In eleventh grade, I was taking a bookkeeping class and was doing a project on running a business. I remember sitting on my bed, crying my eyes out because I couldn’t reconcile the books by $0.03. It was my calling then to find out where those three pennies were and that is when I decided to become an accountant.
It was also in eleventh grade that I had a revelation about having a career. I was sitting in my English class and the girl in front of me was pregnant and married. Waiting on the bell to ring one day, we were talking with our teacher, Mrs. Burke. Mrs. Burke asked the girl what she expected to do in her life. The girl said, “be married.” Mrs. Burke turned around, looked at her and told her that she had been married, but her husband died. She said she didn’t go to college until she was in her 40’s, as a widow, to get over her grief and learn how to support herself. I decided then that I wasn’t going to rely on anyone, especially a man, to get the things I wanted in life.

However, I did meet a boy in high school and ended up getting married when I was nineteen. My mother was happy I was getting married and didn’t encourage me to attend college first. I didn’t let my marriage divert me from getting an education though. I started taking college classes two weeks after I graduated from high school. I was able to get a Pell Grant and tested out of some of the general education courses. The boy I married was in the Air Force, so I continued to move around a lot. It took me seven years and five colleges to get my undergrad degree, but I never wavered from my decision to be an accountant. I started taking graduate courses right away and also passed the certified public accountant exam. By this point, I had started my career in public accounting and frankly was just burned out from so much school. While I am about halfway through my master’s degree, I have yet to pick it back up but the desire is starting to rekindle itself.

I started working at twelve as a babysitter and at fifteen, went to work at a daycare center, working in the after school and summer programs. I worked full time all through college so I wouldn’t have to take out any student loans. After graduation, I finally started my professional career in public accounting at Price Waterhouse. I worked in the tax department, doing corporate tax returns, and it was about this time that my marriage fell apart. Thankfully, we had not had children, so we went our separate ways with no strings attached. Once I divorced, I transferred to the research and development tax credit group that was just getting started. This position allowed me to travel but was based out of San Jose, California at the time. This experience led me to go to a client, Cisco Systems. While there, I transferred to the treasury department because they were opening an office in Reno, Nevada. There, I gained the experience of treasury accounting, booking entries for investments when they went public. When the Silicon Valley bubble burst in the early 2000’s, I found myself without a job and decided to take some time to determine what it was that I wanted to do with my life. After networking with someone in the staffing industry, she recommended me for a three-week assignment at the Amazon Fulfillment Center in Fernley, Nevada. That three weeks turned into an analyst position, with a promotion to controller and a move to Delaware. I was the East Coast controller for Amazon at a time when there were only five distribution centers in the entire country! That position is where I gained my operations finance experience, as well as learning to manage a team of people.

About a year and a half after moving to Delaware, I remarried and we had our first daughter. As intense as Amazon was, I didn’t want to miss her first Christmas. With my operations finance background and a referral from a former peer controller, I landed a role at Bank of America as the Fraud Finance Manager. Not only was I coming into a new industry, but a month into the job, the Fraud Center of Excellence was formed, so I was learning two lines of business within the banking world. I was there for over eight years before moving to Citibank to be the Global Fraud Reporting Manager, which is the role I continue in today.

When it comes to volunteering, I think about the journey I have taken over the course of my life. As a young kid, I was the recipient of a giving program called “Shop with a Cop”. I remember early on, when I was about six or seven, my sister, one of my brothers, and I rode a bus with police officers to the local Kmart to buy Christmas presents for our parents and other siblings. I remember picking out a pair of house shoes for my mother. When I was in my first marriage as an Air Force wife, I volunteered to prepare tax returns for service members. When I was at Price Waterhouse, I got involved in recruiting to try to help candidates decide what they wanted to do in their own careers. One year at Thanksgiving, my roommate and I volunteered with a minority sorority to set up dinner for the elderly. Working at the Amazon Fulfillment Center in Fernley, I realized not all of the area managers and process assistants had
the spreadsheet skills needed to do the reports they distributed, so I taught Excel classes to help them improve their skills.

However, it was really at Bank of America that I truly became involved in giving back. I joined the Women’s Leadership Network where I started coaching and mentoring my peers and junior associates. That program got me involved with Girls on the Run where I served on the racing committee for a couple of years. By this time, my two daughters were attending a Title I elementary school where I was the treasurer of the PTA. They progressed to the Title I middle school in our area and I still serve as the PTA treasurer there. Along the way, they started swimming for the local YMCA, so I joined the Parent Advisory Council and managed the swim team snack bar. We joined our local pool and I’ve been the social coordinator there for the past several years.

Through all of this, Citibank offered a Volunteer Day for me to take a day and give back to my community. I normally used it to chaperone field trips, so still benefiting my family, but my community too. And then this year, Citibank started the Giving Back Leave Program where I have the opportunity to leave my ‘day job’ and work in my community on a full-time basis for up to four consecutive weeks. I chose Friendship House because I have seen firsthand, some of the challenges they are helping others to overcome. If I can make a difference in one person’s life, it will be for the good!