Friendship House has provided case management services to people in Delaware for over 35 years. While our case management services include helping people obtain their birth certificates and IDs, providing financial assistance for outstanding utility bills, or walking with someone searching for an apartment, we offer so much more. Throughout all of our programs, case management is sprinkled into everything we do. We take a holistic approach by providing loving support for people experiencing homelessness and houselessness in Delaware working towards a goal. We value assisting folks on their own journey, helping them navigate to where they want to be, while not dictating or setting expectations on where they should be heading. We often describe our case managers as sitting in the passenger seat while those utilizing our services drive the car. The driver has chosen the destination and is in control of getting themselves there. We will help identify obstacles in their way of reaching this destination, make suggestions for overcoming them and help move barriers in the way or coach them through navigating these barriers. It is important to us people have the opportunity to remain in control of their lives while we provide unconditional, loving support. 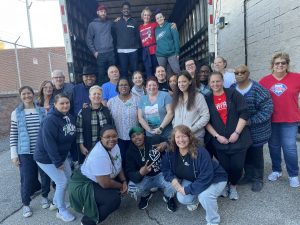 Case management is seen through all our programs. In our Transitional Housing program, staff provide intensive case management to residents as they navigate where to go after experiencing homelessness and often houselessness. Our Empowerment Centers’ staff utilize case management to meet people where they are, listen to where they would like to go, help them navigate the system, and relieve barriers. Our Clothing Bank provides clothing orders to the community as well as case management to the women in our Creating Excellent Outcomes (CEO) program, a life-skills and job training program as they exit incarceration. While our case managers provide services, we also offer support, hospitality, and friendship to everyone who comes to us, and value hearing their story.

Friendship House provides loving support to everyone. We’re here to walk with people on their journey, not to close the door on them. We are their loving, supportive community. We are a place they can call home.

Robert came to Friendship House’s (FH) case managers through the New Castle County Hope Center after returning to the US from Vietnam. Robert lived in Vietnam for 20 years, teaching English and raising his two sons whom he adopted in Vietnam. When a stroke and expired visa left him with no options, he returned home to the US for the medical attention he desperately needed. Upon arriving in Delaware, Robert stayed at The Sunday Breakfast Mission in Wilmington before temporarily moving into the Hope Center. At the Hope Center Robert was immediately connected with FH case manager, Kelly. She helped Robert get Medicaid so he could receive the medical attention he desperately needed. Kelly was able to assist Robert with obtaining his birth certificate, social security card, and other documents he needed to get further assistance such as housing. “My life is full of angels and Kelly is one of them,” Robert said. 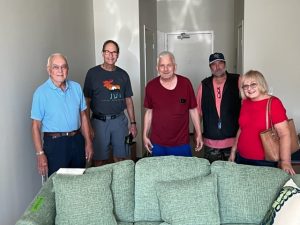 Robert in his new home surrounded by friends

After Robert received medical treatment, he returned to the Hope Center to recover while he looked for a place to live on his own. Kelly worked with him every step of the way. “To me, she is a very comforting person. She understands me and she understands the situation. She’s creative and has a great attitude. I can’t say enough about her, she’s an angel,” Robert said about Kelly. The two had frequent meetings where they would sit together and find applications for housing to fill out. Even when Robert was having doubts, Kelly and FH were there to support him and encourage him to keep going. Robert reflected by saying, “That positive energy they all had, they weren’t accepting defeat, and not letting me accept defeat kept me going.”

Through FH, Robert met Bill, an FH volunteer, who helped support him and more importantly became a friend. Robert spoke about the impact Bill has had during his journey: “He has also become a dear friend. He comes over, he checks on me, he takes me shopping, takes me to church. He’s a really good friend. He’s another angel who came into my life.”

Eventually, Robert was successful in securing a place of his own which Kelly helped him find and apply for, and FH helped pay for the application fee through our Financial Assistance Program. “They really have supported me in so many different ways. I know it would be very stressful, if not impossible, for me to figure my way through these things,” Robert added. He is now living in his furnished apartment, and working a part-time job, which Bill connected him, with Westminster Presbyterian Church (WPC), as an ESL teacher. “Kelly helped me get the house and the bills set up. Then Bill got the furniture from New Life Furnishings (a ministry of WPC). It’s just the kind of stuff I would have trouble doing on my own,” Robert said. 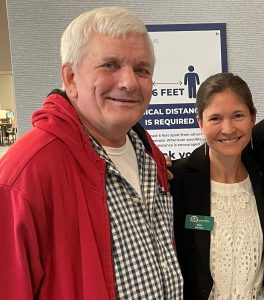 Robert still frequents our Wilmington Empowerment Center any time he needs assistance or help understanding something, and FH welcomes him with open arms. He is part of the Friendship House family and we will be there to cheer him on and guide him whenever he needs. “When you feel overwhelmed and beat down, FH is always there to help you out. That’s what I love about the group.”